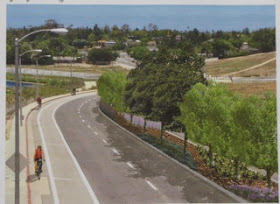 SMALL, INTERESTED CROWD
The meeting held Wednesday evening at the Emergency Operations Center for interested neighbors who live close to the proposed Placentia Avenue Median Project.  A dozen people attended, including a couple staffers and some consultants.

ERNESTO AND RAJA
Director of Public Services, Ernesto Munoz and Transportation Services Manager Raja Sethuraman, told the small gathering about the proposal and showed some graphics depicting the plans as currently anticipated.  They requested input from the attendees. 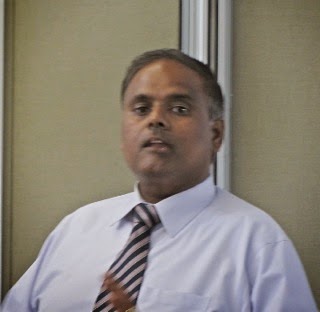 We learned that this project will be funded primarily through over $844,000 in federal grant money - approximately 75% of the anticipated total cost.  Kudos to Munoz, Sethuraman and their team for finding this funding.

ROADWAY NOT TO BE WIDENED
We learned that the roadway will not be widened for this project, nor will any of the many driveways and signaled locations be modified.  And we learned that it is not anticipated that Placentia would be repaved following the installation of the landscaped medians.

OBJECTIVE - SLOWER SPEEDS
We learned that the objective is to slow traffic speeds on the section of Placentia between Wilson Street and Adams Avenue, where accidents are frequently reported, including one very recently.  The assumption is that the installation of landscaped medians will give the appearance to drivers of a narrower street, which might slow down some of the speeders.  One attendee suggested we just hire a cop to be visible in the area... seemed like a good idea to me.

TIMELINE
We learned that this project will be presented to the Parks and Recreation Commission at their meeting on October 23, 2014.  If the commission approves the plan it would be put out to bid and would be subject to final approval by the City Council early next year.  It is anticipated that the project might begin a year from now and would likely be completed by the end of 2015.

ANOTHER CHANCE FOR INPUT IN OCTOBER

From the conversations I heard at the meeting, most of the attendees were grateful for the information and the opportunity to express their views.  Unfortunately, the net that was cast - folks within 1,000 feet of Placentia were notified - seemed not to draw much of a crowd.  Residents and others will have a chance to express their views to the Parks and Recreation Commission in October and, of course, can contact the Transportation Services Division at City Hall anytime at 714-754-5032.
The Pot Stirrer at 9/17/2014 11:28:00 PM
Share