REASONS TO RETAIN OUR LEADERSHIP ON NOVEMBER 3RD

A couple weeks ago I submitted the following letter to the Daily Pilot, hopefully to be presented to their readers as a commentary before the upcoming election.  It, apparently, did not make the cut.  I don't know why... such is life.  We're running out of time, so I thought it was too important to let the election go by without presenting you with my thoughts.  Here's what I wrote. 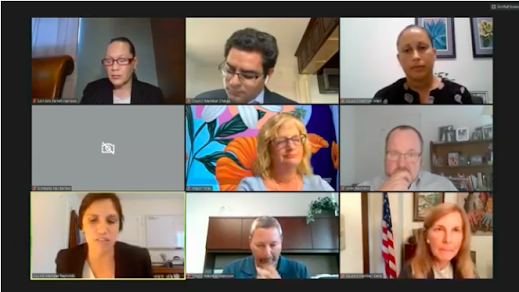 PLEASANTLY SURPRISED BY THE LEADERSHIP

The past several months have been very trying times for all of us, but for those elected leaders who have had to deal with the results of the COVID-19 pandemic, the related economic crisis and the social unrest that has rocked our country, it has been especially difficult.  These are uncharted waters for most of them.  That’s why I, as a 47 year Costa Mesa resident and lifelong Republican, have been so pleased with the actions of my current elected leaders in my city.

DEFIED STEREOTYPES - AND HAVE BEEN EFFECTIVE
Our seven-member city council - two, Allan Mansoor and Sandy Genis are conservative Republicans - has pleasantly surprised me.  Mayor Katrina Foley, Mayor Pro Tem John Stephens and the three new young members - Arlis Reynolds, Andrea Marr and Manuel Chavez - have not reacted the way the liberal stereotype says they should.  They have demonstrated they are NOT “tax and spend” liberals.  Quite the contrary -  they have demonstrated they are concerned residents - true servant/leaders - who have charted a path for our city during these very difficult times that has proven to be wise and effective - and conservative.

AHEAD OF THE CURVE WITH TOUGH DECISIONS
Our City Council has been ahead of the curve on all the challenges facing municipal governments.  They have crafted rules and regulations that kept the wheels from coming off during these multiple crises.  Along with the excellent City Manager, Lori Ann Farrell Harrison and a cadre of outstanding city staff directors, they have taken on tough challenges and worked through them.  They have negotiated necessary concessions with all the employee bargaining units, trimmed staff where required, furloughed others and made other cuts in an attempt to balance costs with the unknown impact of the COVID-19 pandemic on revenues.

BUDGET ON PLUS SIDE, NOT A HUGE DEFICIT
Recently, during a meeting of the Finance and Pension Advisory Committee meeting - those smart folks who volunteer to study complex finance issues and advise the City Council - heard from Finance Director Carol Molina that the catastrophic budget shortfall that had been feared last April has not materialized. In fact, the latest assessment of our finances shows that the City of Costa Mesa ended the fiscal year 19/20 with a small, quarter million dollar surplus instead of the potential $28 million shortfall.  This is great news and reflects the diligence of the leadership of this city - trimming costs where possible to meet reduced revenue projections.  However, lies about this fantastic accomplishment have permeated the internet, posted by rabid opponents of the current council majority.

REMEMBER ON NOVEMBER 3RD
As we go to the polls between now and November 3rd - many of us have already voted - I think it’s important to recognize that our current city leadership has behaved, not as partisans, but as true servant leaders, doing the best they can for the residents and businesses in this city under circumstances no previous council had ever faced.  Because the future is still fuzzy, it seems to not be the time to changes horses in the middle of this pandemic stream.  Through their wisdom, foresight and tireless leadership Katrina Foley and John Stephens have earned the right to continue to serve you on the City Council.  Please consider that as you cast your ballots.
(If you wish to choose to comment on this you must migrate to my Facebook page.  The comments feature on this blog has been disabled.)
The Pot Stirrer at 10/31/2020 04:38:00 PM
Share